A FITNESS influencer has claimed a bloke snapped a picture of her from behind while she was working out at the the gym - and admitted it made her feel "extremely uncomfortable.
Julia, from Pittsburgh in Pennsylvania, US, was filming a workout for her YouTube channel and captured the whole thing on camera before gym staff allegedly confronted him about it.
The fitness enthusiast was laying on her side facing the mirror while two men wearing masks used the weight machines behind her.
It was during this time that the man appears to take out his phone and crouch down, and that's when Julia claimed he snapped the picture of her.
In the clip she shared on TikTok, he then stands and turns away, calling over a friend who then appears in the shot.
Julia was watching the two men in the mirror as she trained her glute muscles and appeared to become concerned once she'd noticed what had happened.
"He denied that he took a picture which made me feel crazy for thinking about it," she said, before asking viewers what they thought.
One accused: "Not only did he take a picture but he clearly showed his friend."
"This is why I don't feel comfortable at the gym," a third added.
Some people suggested Julia report the incident to gym staff to which she replied in the comments to say that she did.
She claimed that staff confronted the man after she'd told them what had allegedly happened and that he denied taking the photo. 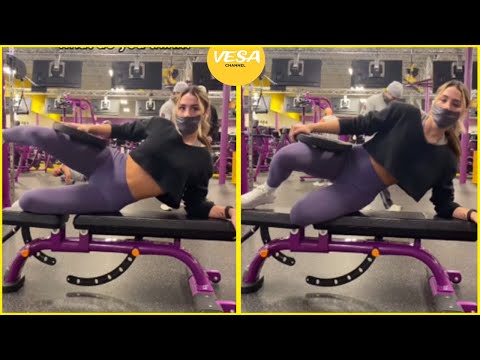 SUBSCRIBE to Vesa Channel A FITNESS influencer has claimed a bloke snapped a picture of her from behind while she was working out at the the gym - and...